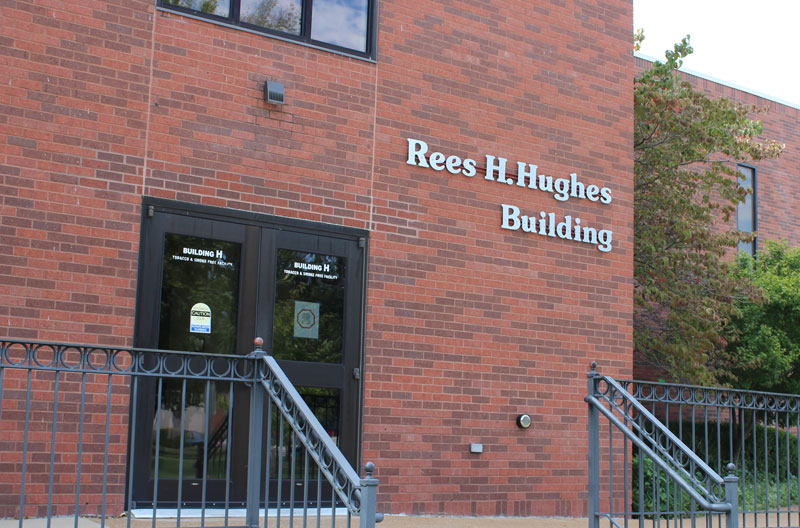 Parsons, KS- Labette Community College will dedicate the Rees H. Hughes Arts & Humanities Building during a ceremony on Monday, October 2. The Hughes building houses the classrooms and labs for art, graphic design and humanities classes and is located on the LCC Main campus, south of the Student Union.

The LCC Board of Trustees recently voted unanimously to name the building in memory of Rees H. Hughes. He served as superintendent of schools in Parsons from 1922 – 1941. Dr. Hughes did a great many things for the improvement of the public schools of Parsons. One of the most important things was the organization of Parsons Junior College, now known as Labette Community College. In fact, he is considered the founder of the college. If it had not been for his leadership, LCC may not be here today.

Dr. Hughes obtained his A. B. degree at Washburn College, Topeka, Kansas. Later he was principal at Fort Scott high school. Next he served as superintendent of Parsons schools. He later served as the second president of Pittsburg State University. After retirement, Dr. Hughes continued his life of service as a member of the Kansas legislature. Dr. Hughes was recognized by Labette Community College as the first Cardinal Citation Award recipient in 1972. The Cardinal Citation Award is the most prestigious honor awarded by the college.

In addition to Rees H., his son William ‘Pete’ Hughes was also a Cardinal Citation Award recipient in 1995. He has given outstanding service to the college and the community. He has also been actively involved in his church, the community chorus and the Labette Creek Crooners. In addition, he served as President of the Parsons Kiwanis Club, Parsons Chamber of Commerce, the Parsons Community Foundation, The Labette Community College Foundation, the YMCA, the Parsons Public Library, the USD 503 School Board, and as Chairman of the Parsons Human Relations Commission and The United Way. He is active in the boy scouts and Parsons Public Housing Authority. He also assists his wife, Mary, with Operation Bright Touch. Together, he and Mary founded the annual Katy Days festival. In addition, they both served as Honorary Chairs during Phase I of the LCC Pathways to the Future Capital Campaign.

Rees Hughes followed suit as the third generation recipient of the 2017 Cardinal Citation Award. Rees attended LCC, as did each of his three siblings (Megan, Janie, and Griff), before earning multiple degrees that culminated in his PhD. Rees has had a 23-year long career at Humboldt State University, which is part of the California State University system. He is the Assistant to the Vice President for Student Affairs and Director of Student Life. He has traveled extensively to conduct research and support furthering education internationally and he has published numerous articles and essays.

“The Hughes family has long and rich history with Labette Community College and have been lifelong contributors to education in Southeast Kansas and beyond,” said LCC President, Dr. Mark Watkins.

Through their volunteer work and professions, the Hughes family has positively impacted thousands of people in this community and beyond. The Rees H. Hughes Art & Humanities Building will honor the outstanding contributions to education and community service from the Hughes family in a permanent and meaningful way.

A public dedication of the building and reception will be held on Monday, October 2 at 2 pm in front of the Hughes Building at 200 S. 13th Street, Parsons.